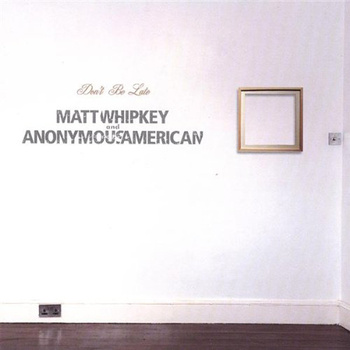 Long regarded as one of Omaha NE’s finest songwriters, no small feat considering the cities esteemed brethren, Matt Whipkey and Anonymous American in Don’t Be Late have released there finest album. Since 2003, Whipkey has made a name for himself across America. The Minneapolis City Pages raved, “Surely not anonymous for long,” while the Roots Music Report praised Don’t Be Late, “An excellent rock album that deserves to sell across generations. Albums with this emotional sustenance are few and far between.” Even across the ocean listeners are identifying with the albums timeless themes, “If you’re after some classic American rock and roll look no further. Flipping from the raw chaos reminiscent of Steve Earle to the more commercial.” (Americana UK)

The music of Don’t Be Late achieves a simultaneous sense of triumph, despair, celebration and worry. Considering the times in which it was composed, Whipkey and his band have managed to tap into the American conscious of the last several years. A fantastic record from a writer who understands the personal is political. A thrilling performance from a band that knows rock and roll is universal.